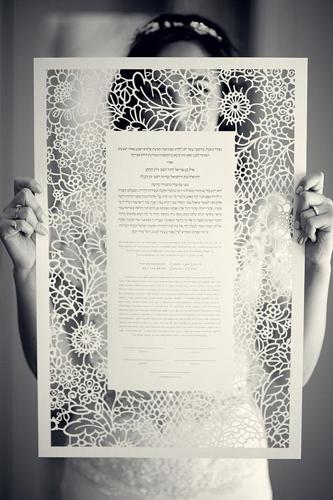 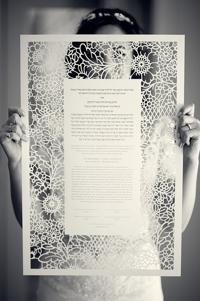 A customer of Israeli artist Dalia Ben-Moshe with her ketubah, which Ben-Moshe designs in Israel and transmits to the Cleveland Institute of Art’s Digital Output Center to ship U.S. orders. 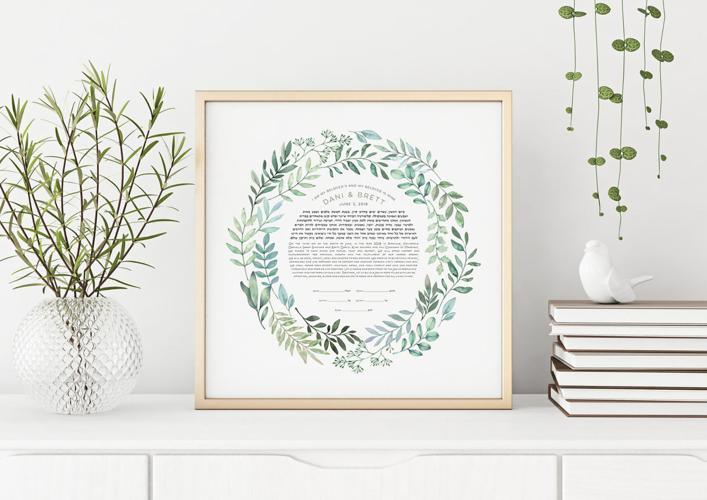 Framed version of Israeli artist Dalia Ben-Moshe’s ketubot, which she designs through her business, Ketubata. 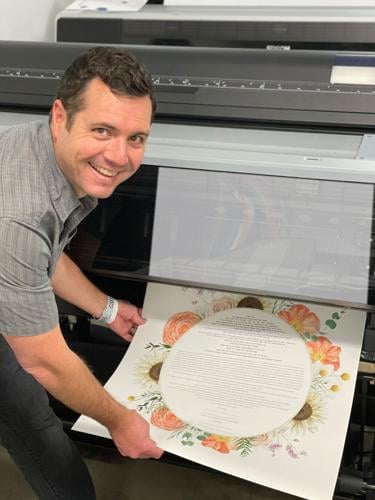 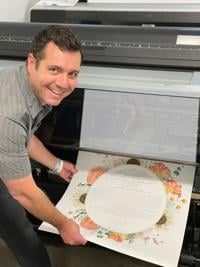 Armed with a degree in architecture and an avid interest in art and design, Israeli artist Dalia Ben-Moshe has been designing ketubot, or Jewish marriage contracts, for over a decade now.

First as wedding presents for friends and family that later developed into a hobby, Ben-Moshe designs about 80 ketubot a month under her business, Ketubata. Her designs are shipped throughout Europe and the United States.

But a few years after she opened her business, she hit an inevitable snag: a couple an ocean away from her in Cleveland received a damaged ketubah with little to no time to spare before their wedding in 2017.

“At that time, the business had been open for a few years and I would get a bit flustered about it,” Ben-Moshe says. “I used to send them through FedEx all over the world, and had them in batch orders coming from my house, which would be picked up by FedEx. In this situation, I had that customer in Cleveland who needed one printed within 48 hours. I emailed a few printers throughout the area, seeing if we could work together for my United States orders,” adding all of her European and Israeli orders are printed in Jerusalem.

The printer Ben-Moshe ended up selecting was the Cleveland Institute of Art’s Digital Output Center, headed up by manager Josh Werling. The Digital Output Center, located on the CIA campus in Cleveland’s University Circle, was created in 2008 and mainly provides wide-format printing services using water-based pigment inks. It uses an archival printing process perfect for a family heirloom like a ketubah.

“The professionalism was amazing, and (Werling) responded so quickly,” Ben-Moshe recalls. “He seemed to have his eye on the ball and had very good customer service that I could see straight away. And I’ve never been wrong about that. There has never been a timing or printing issue while working with Josh.”

When Werling first heard from Ben-Moshe, he said he had no idea what a ketubah was since he’s not Jewish. But when he started collaborating with Ben-Moshe regularly, he soon understood exactly what he’d be working with.

“My parents were raised Episcopal and Lutheran, and we’d attend church occasionally on holidays,” Werling says. “When my brother got married, he had a nondenominational service. They had a ketubah. I was the best man, so his sister-in-law and I signed as witnesses. I thought it was this really cool thing that I’d never seen before in a wedding service.

“That first one we printed was a big rush, and I didn’t fully digest the information. But once we did it regularly, it occurred to me it was what I signed at my brother’s wedding. It was so cool.”

Ben-Moshe says working with Werling has been exactly what her United States orders needed – especially since the printer isn’t closed for Jewish holidays.

“The way I see Judaism is, it is not us against the world – everything is in the world to be used appropriately,” Ben-Moshe says. “It’s been amazing to work with him. In fact, it’s been great because my printers are usually closed the whole Passover (holiday). But, (Josh) is working. (The Digital Output Center) has really open people, and I’ve never felt uncomfortable even though faith is a very intimate thing.”

As a non-Jew handling an important part of the Jewish wedding ceremony, Werling says the process has been “a blessing.”

“It adds this sense that we’re involved in providing a piece so significant to people’s lives,” he says. “We like to believe these are things that could be passed on to their children and their children’s children. It is also this legally binding contract, adding an extra layer past a marriage license. It is a really beautiful sentiment. It helps reinforce the weight and significance of marriage. The whole thing has been a very cool learning experience, both culturally and historically.”

And for Ben-Moshe, the collaboration has been “just like magic.”

“It’s an amazing thing,” she says. “My busy season is from March to August and it can be very overwhelming. It was being sent by courier from me and I was packing orders, waiting for the FedEx driver to pick it up. But with Josh, the partnership has been so successful. It takes the weight off my shoulders, and I never have to worry about the quality. A lot of my customers say it’s like magic.”